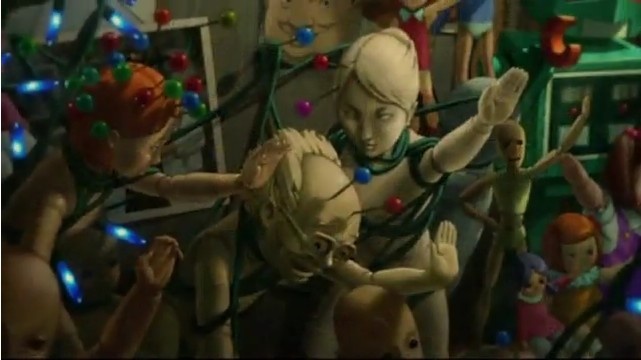 Paprika is a film that embellishes its characters with heavy use of motifs to strengthen the role each of the characters plays in the overall narrative. Some may argue that tying motifs to characters acts only to telegraph how the author thinks the audience should respond to a specific character, and weaken the work as a whole. However, Paprika is a work where the characters were written to fit roles within the story, and not the other way around. Each character serves such a distinct role and the story depends so much on the characters interacting in the way that they're supposed to that understanding the characters and understanding the plot go hand-in-hand with each other. Paprika uses motifs that are tied to the internal state of the characters in particular to elaborate on the intentions and anxieties of its characters and relate them to the viewer. This can cement a character's role within the overall plot, and as the plot takes turns for the more abstract as the movie plays out, become more and more important to knowing the story rather than simply the plot.

Even taken at face value the plot of Paprika is somewhat abstract. This point isn't helped much by a point of view that, though omniscient, refuses to show anything other than what the character in focus is experiencing and perceiving as real. Though confusing, the fact that so much of the movie uses dreams in particular as a setting means that the self-perception and mindset of the person having the dream has an unusual power to change the setting as we're experiencing it. So, to understand the characters and to understand the plot, it's important to be able to distinguish what motifs follow each character, what this reflects of the state of the character itself, and how it's changing over the course of the movie. The first act is relatively light on its actual use of motifs and themes because it's busy introducing the characters and the role they'll play as the conflict develops. That isn't to say that the motifs of the characters aren't introduced as well, but you're not expected to have picked up on them yet as a viewer – it takes until the conflict develops and the roles are cast that things actually start to happen.

The first introduction to some of the motif language of Paprika comes with a character whose story is actually ending, Himuro. Himuro is a character that the audience never meets but that they will still be very familiar with by the end of the story. Even with no real dialogue, his dolls and the image of the female automata come to define him as a character and recur up to the end of the movie. Although he's doomed in the story, we find out almost everything about who he is and how ended in one series of scenes that looks through his apartment. In Himuro's dream, and in his apartment that comes to reflect it, we see both the disappearing boundary between dream and the “real” world in action for the first time and a visual breakdown of the forces that have come to control him. His apartment is a tangle of dolls and odd green christmas lights, with doll representations of Tokita, Atsuko, and Paprika appearing to be covered in vines and lit by little blue light bulbs. Though the audience isn't equipped to figure it out at this point, the conflict of the film is laid out in those few scenes – the plant and the blue butterflies, the symbols for the two agents of retreat and a loss of self, and how they try to assert themselves on the other characters and the world at large. And from the sum of motifs, we see the beginning of a theme that the separation of dreams and reality is a positive good. The villains, who turn out to be Osanai and the Chairman, make it their business to put this to the test. 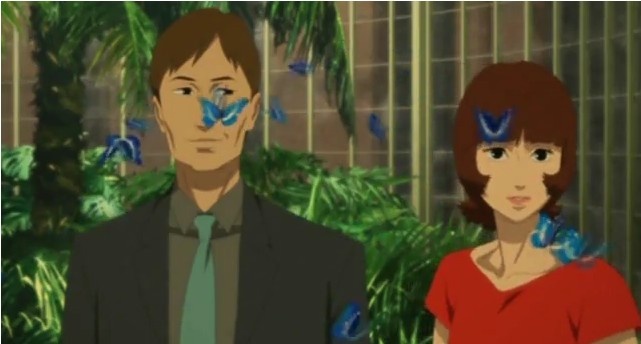 Osanai is a character who is developed remarkably little initially but is enormously important to the plot of the film as it enters its second act. He is represented visually by either blue butterflies that dot the first act of the movie, and as a visage of Oedipus. His presence is foreshadowed as early as a dream sequence that Atsuko is lured into while searching Himuro's apartment. Immediately after being lured in, we see a single blue butterfly – and again, when we see the doll that sits in place of where Himuro later meets his end in the real world. As the parade advances through to the end of the movie, a flock of blue butterflies also accompanies it. And when Paprika is finally cornered, it's by a thick flock of blue butterflies that swallow her whole.

Osanai is also involved in a very important symbolic dialectic between himself and Atsuko. Atsuko, and later Paprika, are both visually linked with the Sphynx of Greek tragic fame. In a scene when Konakawa first meets Atsuko in person, they happen to be sitting in front of a print depicting the Sphinx sitting in front of Oedipus. Atsuko is carefully positioned in the scene to sit directly below the Sphinx, and Konakawa positioned below Oedipus. Konakawa then makes a comment that he knew from the beginning that Atsuko and Paprika are one and the same. This scene repeats itself, as Paprika later finds herself cornered by Osanai and the Chairman. To escape, she barricades herself in a room and escapes into the painting that hangs largest on the wall – Gustave Moreau's Oedipus and the Sphinx. Paprika, again, assumes the role of Sphinx as Osanai assumes the role of Oedipus, and they exchange blows within the painting. Paprika as the Sphinx implies that she's fated for death after her riddle is solved, but Osanai as Oedipus has repercussions of its own. Firstly, he's the one who is clever enough to solve the riddle of the Sphinx. Ultimately, he does indeed 'solve' the riddle of Paprika as Atsuko, just like Konakawa did. The other repercussion is that he also creates the circumstances of his downfall through his own hubris. And ultimately, finding Atsuko draws the attention of both the Chairman, who comes to claim Osanai's prize as his own, and Konakawa, who ultimately kills him. 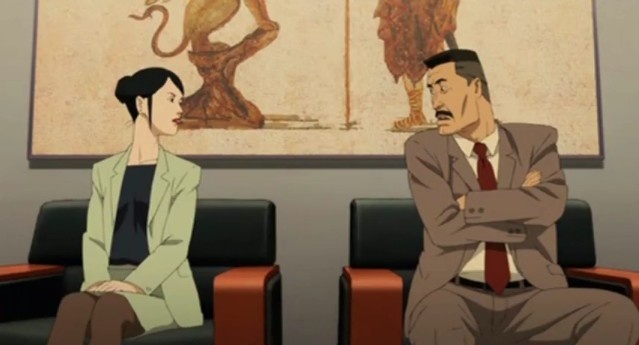 The other villian, the Chairman, is the person Osanai answers to. He is associated closely with plants and vines, as well as being wheelchair-bound in the real world. As the role he takes in the story grows, so do the plants he surrounds himself with, as well as taking the form of a vined plant in the dream world. His presence reaches all the way back to the scene where Chiba explores a theme part she first saw in Himuro's dream, only to find it weathered with time and covered in vines, showing how Himuro isn't the one in charge anymore.

The eponymous character in Paprika is a literal nobody, a character that only exists in peoples' dreams and that has no direct representation in the 'real' world. She's supposed to have a 'real' identity, and the movie makes hints & nudges in that direction but never explicitly names anybody, leaving her as “everybody's dream girl”. It also gets confusing later if you make assumptions early. Her role in the story is as a simple therapist to patients having sleep issues. More than just talking about dreams through her patients though, she has the ability to both enter other peoples' dreams and project herself into them. Not being an actual person per se, she also has no consistent visual motifs of her own. Rather, she strategically co-opts the motifs of whatever character is the best fit for the dream at hand – though always of someone fictional. Japanese, Chinese, Greek, and more familiar Western fairy tale characters all serve as Paprika's 'disguises' at one point or another. You could make the case that she is then defined by disguises, which is appropriate for a character that exists for the very purpose of being one. Paprika, ostensibly nobody, is cut in twain by Osanai as the movie meets its peak and is revealed to be just a (literal) disguise for Atsuko Chiba, with Paprika's death representing a transgression against the film's theme of the separation of dreams & reality.

Many of the more nuanced relationships & oppositions the movie makes are defined through the use of motifs. We see small visual cues eventually sum up to become an outline of what the film is conveying to the audience, especially when it's at its most implicit in the case of Himuro. Rather than simply announce a characters' arrival, these motifs also play a part of their own in defining the characters they're attached to, helping the narrative and adding more beyond what's simply explicit.