FLCL-an evolutionized anime at its time

FLCL, also known as fu-ri-ku-ri[????], is an unique and alternative Japanese anime published in year 2000. It was produced by Gainax of Neon Genesis Evangelion and Production I.G. of The Ghost in the Shell. Both are the magnates in Japan’s anime industry. The evaluations for this OVA series are polarized. For those who enjoy watching, it is a piece of art that no one should ever miss, and for those who did not find it as enjoyable, it is just a non sense anime with an unsystematic story setting. However, it is undeniable that the anime itself had a very high production standard. The imagery, character development, and the use of back ground music take this anime above and beyond anything else around its time. Therefore, the anime FLCL is one of the most creative and evolutionary Japanese anime of all time.

Many other anime take a systematic approach when telling a story.  FLCL takes a different approach.  The director never allows the audience to become relaxed when watching this anime. He uses different camera angles over large and detailed landscapes to give us a very unique view of the action taking place, and it’s rarely that so many of this filming skill can be found in one piece of work. Furthermore, His characters usually go from one extreme temperament to the next. The images that we see are always changing as well. At one point, you can have a “normal” side view of the characters interacting with each other, all of a sudden, when the action picks up, the view turns into a replication of black and white Japanese Manga. At one point, characters could be conversing and then a robot begins to appear out of Naota’s head and a big battle takes place. The director keeps the audience on the edges of their seats by keeping the visuals of his anime unpredictable. Surprisingly, all these randomness and madness mixed smoothly together and make the anime even more exciting and enjoyable than average animations. 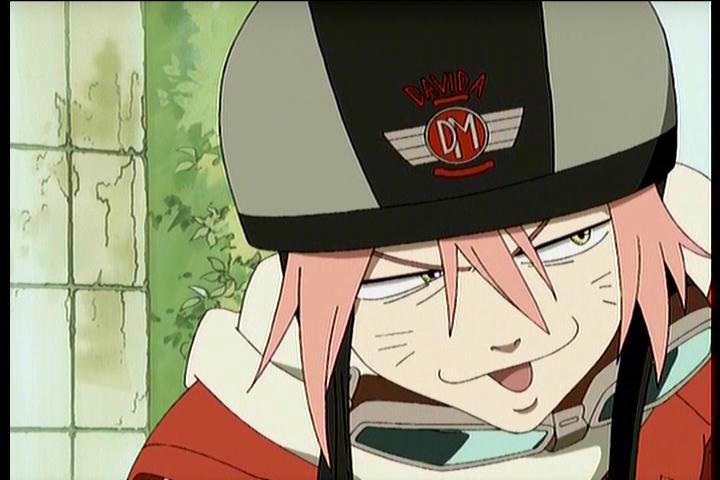 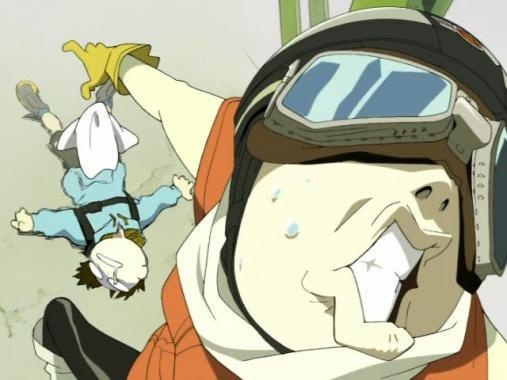 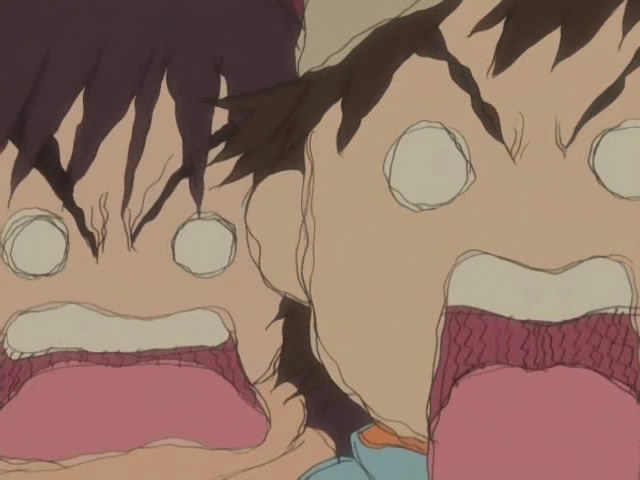 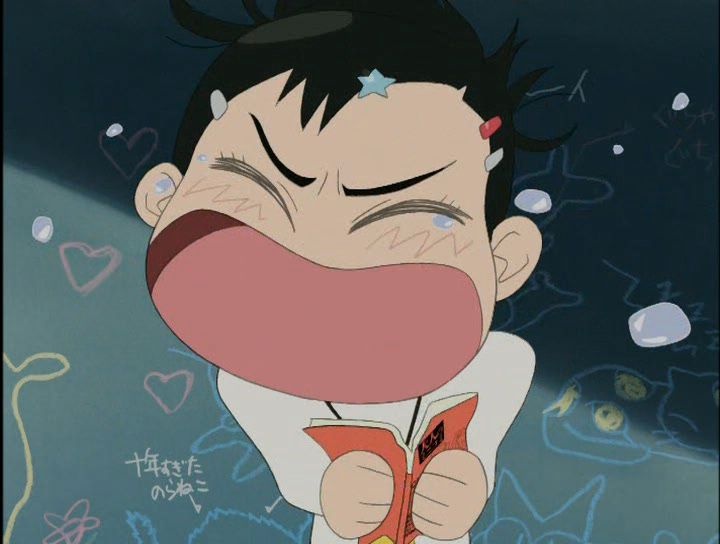 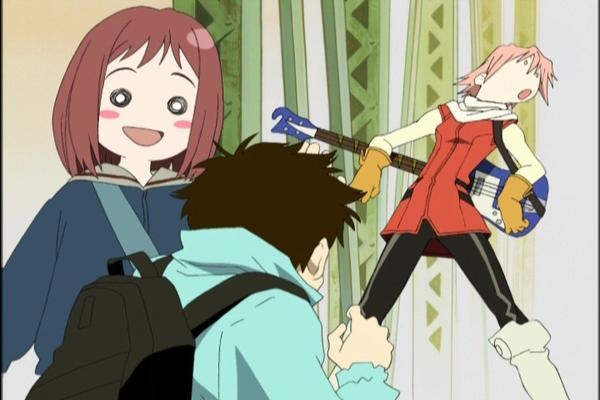 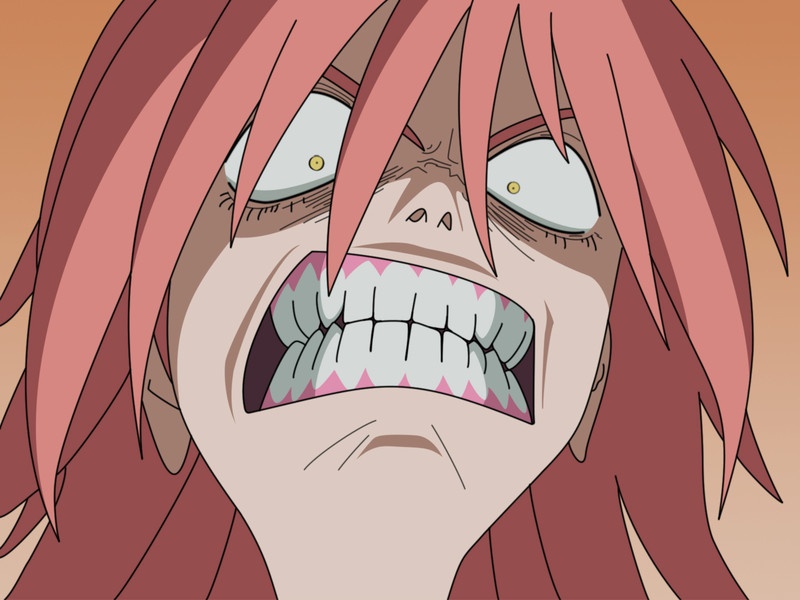 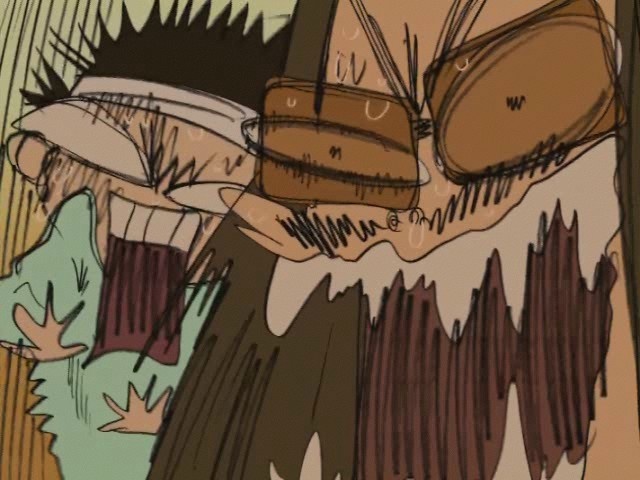 From these pictures we can see that how the character's face can frequently change into Manga style with some crazy facial expression
and creative a special effect to enrich the anime. 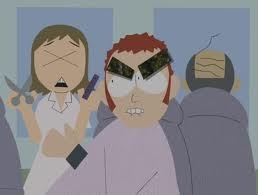 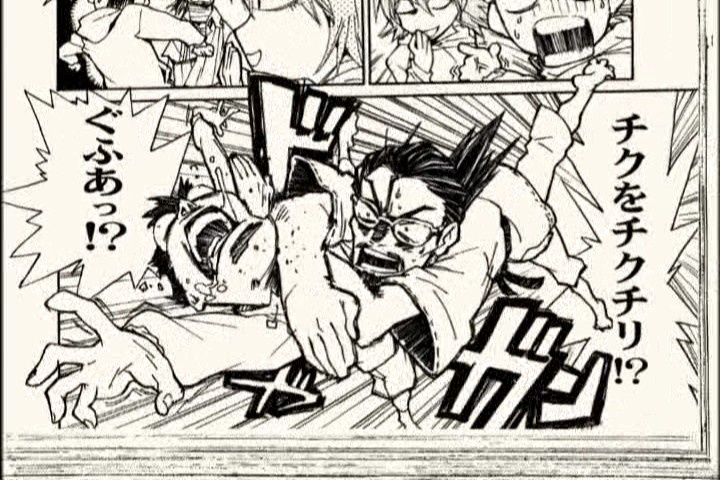 Manga-style is being used a lot in the anime, and there was also one scene with the paper-cut style of South Park. 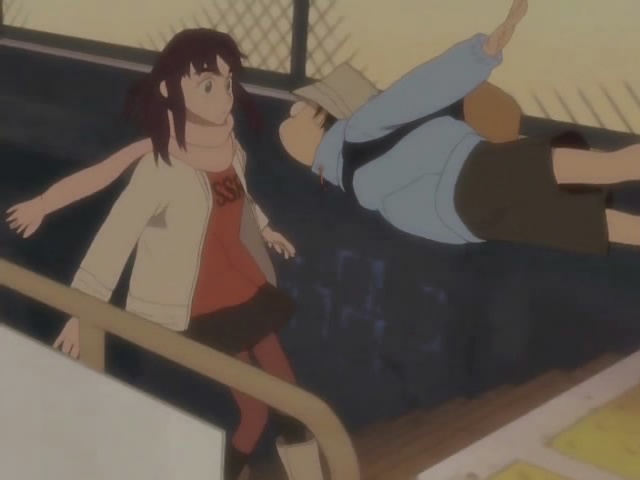 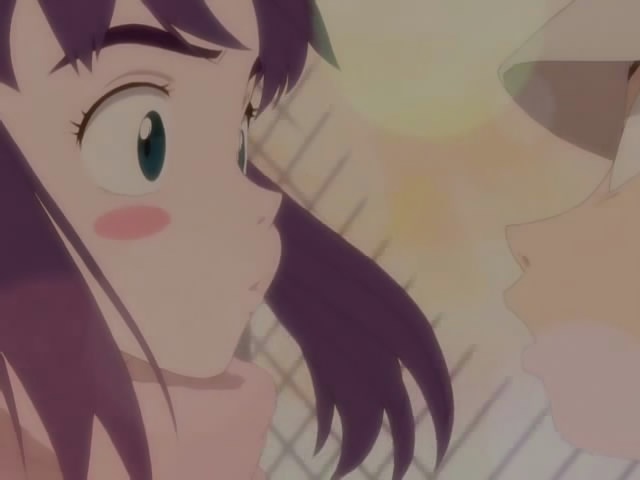 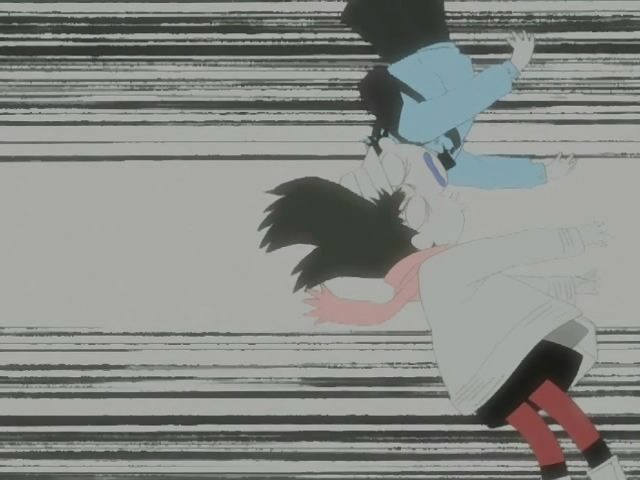 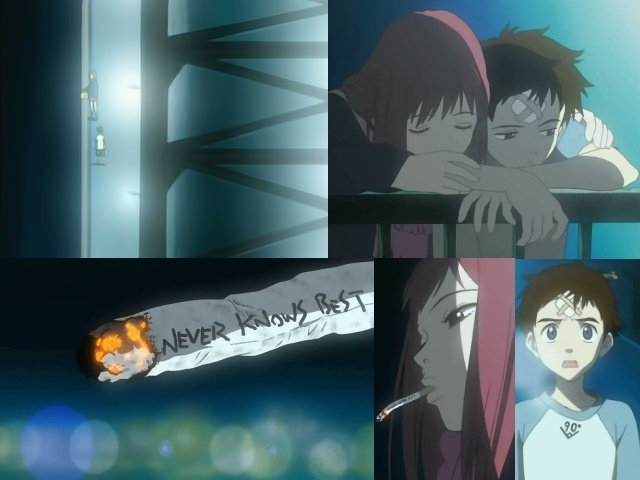 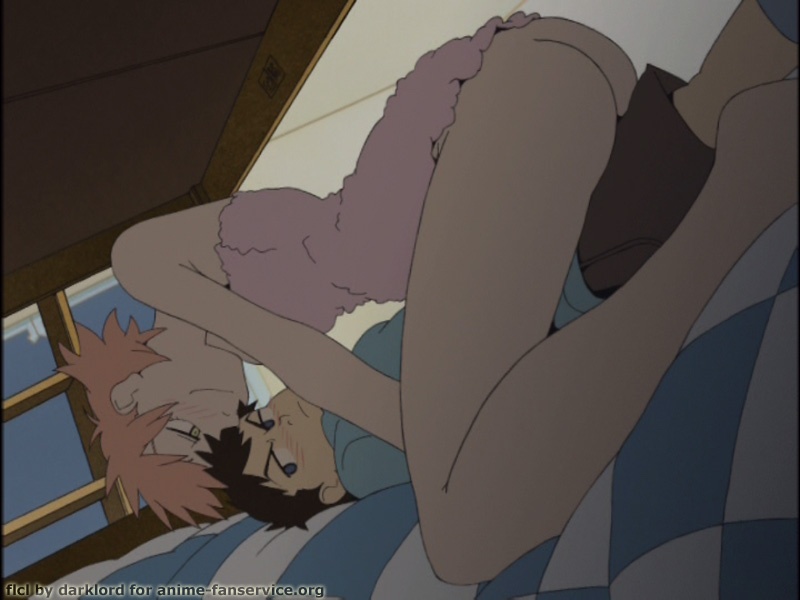 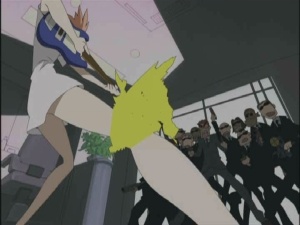 The unique techniques that were used create a refreshing environment of the anime, and score for FLCL really helps drive this anime in to another level. The music was actually performed by the band “The Pillows” which following this anime, have become quite mainstream in Japan. The music that they produced for this anime perfectly complements the style that the story is told in. The music is fast paced and up-beat when the story is fast paced, and is slower and darker when the anime slows down. It also makes dramatic shifts when the anime takes dramatic shifts in its presentation of the story. The director uses this fantastic score to his advantage to help provide his story with the up-beat, fast paced, and hyperactive feeling that it exudes.

To go along with the unpredictable visuals and energetic background music, the actual story line that the characters take place in is also wild and unexpected. It starts off with a boy and a girl chatting by the river underneath a bridge.  Everything seems relatively normal, until an insane girl, Haruko, comes speeding down the road, runs that boy down, and hits him over the head with what appears to be an electric guitar. This leads through a series of bizarre events that only strong, dynamic characters could hold together, and luckily, Kazuya Tsurumaki, builds strong dynamic characters for his story. Most of these kids are around that age that puberty begins. It is easy to tell right from the start that Naota is a young boy and is still a little uncertain about girls, while his brother’s girlfriend, Mamimi, clearly already has interests in boys.  The kids that Naota goes to school with are the same as he is when they laugh and giggle at him when they think that Mamimi is his girlfriend. The stories main character, Naota, is dynamic and changes as the story moves on. At first, he is essentially a young innocent boy who will not admit his love for Haruko, however right before Haruko leaves him at the end, he tells her that he loves her.  Mamimi also changes at through out the story as by the end she chooses to move on from Naota’s brother and go to photography school. Of course, there is also Haruko. Haruko follows no line of reasoning. She is the character that whenever she comes onto the screen, she makes you sit right up in your seat and get ready for anything, because she is easily the most unpredictable aspect in this story. Even though she tends to be the most interesting character, we know the least about her. Where did she come from? What is her purpose? Does she really only care for herself? Naota is told to beware of her. Is she really dangerous? Even though she typically very careless is the catalyst of violence, she seems to be caring of Naota. The director purposely leaves Haruko a mystery to the audience until the very end. This mystery allows Haruko to take on so many roles through-out the anime, and it is because of her that the other characters around her grow into a new person by the end of the anime.

In the end, FLCL is a “coming of age” story. It follows these kids as they go through this madness but in the end come out a wiser person than what they started. It tells the meaningful story of the awkward times for young teenagers as they go through their puberty and learns more about themselves. In an interview with Marc Handler, the ADR director and the writer for the English language version of FLCL, he was asked about how he thought of this series. He answered that,” I thought it was just a bunch of hip Japanese artists screwing around. The way it plays with contrasting styles; I thought this was really cool, but I didn't see any depth. Once I got into the story, I needed to read the translations. It really has a very deep story and really is very affecting.” As you can see, FLCL is not just a nonsense anime with a lot of craziness. The director attentively arranges the layout of the story and finally lead us to the message that he tries to express so that the audience can understand the true purpose of FLCL. All over all, the camera angles, visual styles, varied landscapes, music, and character development together equally help to create this truly mad story in a way that many others will never try replicate and that lead FLCL to be an unique anime that must be seen by anyone who considers themselves a fan of Japanese anime.