Autism Spectrum Disorders are lifelong neurodevelopmental disabilities. The onset is usually before 36 months of age and can be characterized by; impairments in reciprocal social interactions, impairments in verbal and non verbal communication skills, stereotyped behavior, interests and activities

Accurate diagnosis is important for reasons being:

The board term for the student with neurological disorder that affects a children's ability to communicate, understand the language, and play with others is called Autism Spectrum Disorder. A lot of students with Autism can differ in the abilities, intelligence, and behavior. Some autistic pupil don't talk at all, while others may produce some speech words. Sometimes a children with advanced language skill may have limited expressive skill; they talk about limited range of topic, they can be over-obsessive with one particular topic they are fond of. Also, they have the tendency to have uncontrolled reaction to specific stimuli, for example, they can become over reactive to bright lights, noises, or certain textures of the food.

Statistics: According to Current Data from the Center of Disease Control Prevention, the children on autism spectrum disorder has been identified 1 out of 88 children.(1)

Cause: The cause of ASD has not been known. The researchers are currently studying in the the brain relating to chemical imbalances and neurological damages. (2)

They usually have some of the following characters, ranging from mild to severe:(They are typically shown at the age of three)

There are five types of Autism under Persuasive Developmental Disorder: 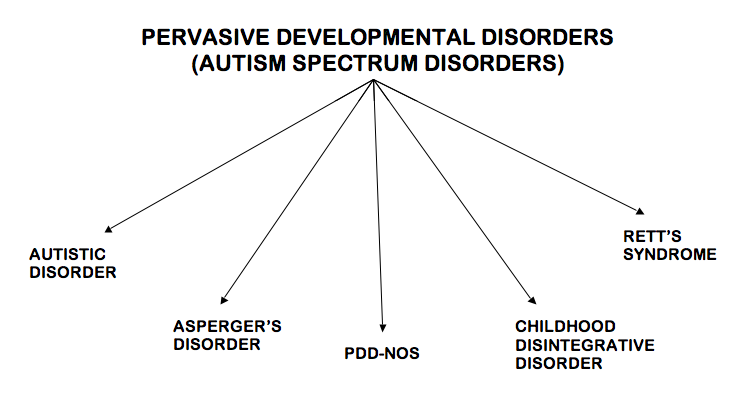 The children with autistic disorder are usually eligible for services under the federal law of Individuals with Disabilites Education Act (IDEA) including Early Intervention and Special Education Service.

"Autism does not apply if a child's educational performance is adversely affected primarily because the child has an emotional disturbance, as defined in paragraph (c)(4)." [34 CFR §300.8(c)(1)(ii)]

"A child who manifests the characteristics of autism after age three could be identified as having autism if the criteria in paragraph (c)(1)(i) of this section are satisfied."[34 CFR §300.8(c)(1)(iii)]